Levy payers (either growers or their agents) have been invited to register for our Biosecurity, Emissions, Levies Information System (BELIS).

This order, which comes into force on 10 June 2019, imposes a levy on potatoes grown by growers. The levy must be paid to Potatoes New Zealand Incorporated by growers, or by collection agents who sell or export potatoes from growers.

Before this order, a levy was imposed on potatoes by the Commodity Levies (Potatoes) Order 2013. This order revokes and replaces that order.

The summary table outlining the current vegetable levies for vegetable growers in New Zealand has been released and is available here.

Electionz.com has reported a final result of 81.69% of growers voting for the proposed Potatoes New Zealand Inc. A total of 71 votes were received from the 173 eligible potato growers representing a voting percentage of 41.04%.

Potatoes New Zealand is pleased to announce the continuation of the PNZ commodity levy for the 2019-2025 period.

The vote is also recorded on “weighted” vote based on gross sales values. When adjusted to reflect the value of the vote cast 88.56% voting in favour of the proposed levy. This means almost 90% of the votes based on sales value wanted a continuation of the commodity levy

PNZ has undertaken considerable effort during the current levy period to ensure that the levy collected has been spent on activities that add value to the grower and represent an investment and not a cost. It is therefore pleasing to hear that this is supported by the continuation of the levy.

PNZ will continue unashamedly to focus on deriving and reporting value from the grower funds collected. We acknowledge that growers’ funds should wherever possible be spent to achieve maximum return.

The widespread support received from growers during the levy consultation process of the PNZ Strategy and business plan means that PNZ is a strong position to act according to grower wishes over the next levy period. Feedback from growers during the levy consultation process focused on compliance, license to farm and tangible returns from the research & development program. Having heard from growers, activity by PNZ over next levy period will focus on demonstrable returns from research & development; and profitable potato farming given compliance requirements.

On a personal note I would like to thank the staff of PNZ for their hard work during the levy vote period and the ongoing support and commitment of the Chairman Stuart Wright and the Board of PNZ. 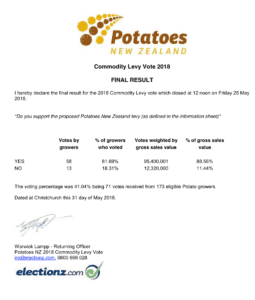 In April-May 2018 commercial potato growers voted on whether to renew the compulsory levy on potatoes grown in New Zealand.