Precision agriculture has had good uptake in cropping in New Zealand, providing tools to help manage production issues as well as environmental concerns around crop inputs. Some of the most easily gained benefits include auto-steer, which leads to work efficiency and fuel saving, and section control of planters and sprayers. This results in more efficient application of inputs, and associated savings.

Yield monitors are common on combine and forage harvesters, and the data obtained from these provides a good starting point for the creation of zone maps identifying spatial areas of high and low yield, and temporal variation over different seasons.

In 2015, FAR began an MPI Sustainable Farming Fund project Transforming Variability to Profitability. This project aims to develop a simple way of integrating geospatial soil, plant and crop harvest characteristics to analyse profitability, and aid in decision making processes to improve profitability in future years. This will increase efficiency around inputs, providing both economic and environmental benefits for growers.

As part of this work, we fitted yield monitors to two potato harvesters, one each in the North and South Islands. Data from these has shown large spatial variations in the yield of potatoes across paddocks (Figure 1). 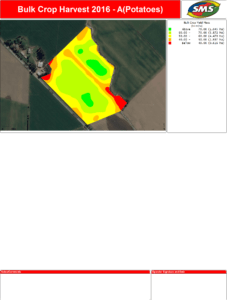 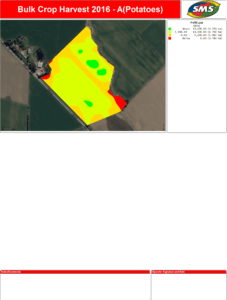 While yield is critical, so is the profitability of the crop. Using this harvest data we can generate spatial profit and loss maps, using fixed values for income and expenses per hectare (Figure 2).

For the majority of arable crops, yield is the key driver of income, as providing the crop meets a minimum quality standard, the income per tonne of product is fixed. However, with potatoes, the size of the tuber also greatly affects the value of the harvested crop. As part of this project, tubers were hand harvested from potato paddocks. Samples were taken at 50 metre intervals down a single row of potatoes, measured and tuber size recorded. Variation in tuber size from one of these hand harvests is shown in Figure 3. 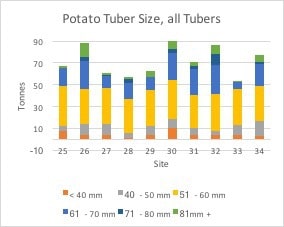 In the paddock shown in Figure 3, there was a 55mm minimum tuber size for the processor to be supplied, and Figure 4 below shows the yield at the different points in the potato paddock divided into 55mm and larger sized tubers that meet the market specification, and those less than 55mm size that are out-of-specification. These small tubers still have to be harvested and handled, incurring costs, without returning any value. 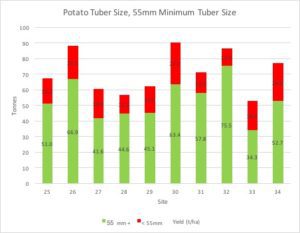 Depending on the market for the potatoes, the value of different tuber sizes can range from $0 per ton for potatoes outside the specification range, to $1000 per tonne for premium, value added potatoes. This variation will multiply the effect of the yield and tuber size variation.

Now that we have identified these variations, we need to try and understand what is driving the variation, and what we can do to alter the performance of the crop. There are two types of variability, being:

This SFF project is to be completed by June 2018.

Growers throughout the country had the opportunity to hear from Scottish precision agriculture (PA) expert Jim Wilson, of Soil Essentials, who spoke at a series of events recently. Over 50 people attended the event in South Canterbury where Jim outlined the role that PA plays for potato growers in Scotland and how to ensure that growers make the most of PA technology.

He described a project he is involved with that aims to use satellite and UAV imagery along with weather and temperature data to help forecast potato yield and tuber size distribution, disease and when to desiccate the crop. Long term, this work could lead to the ability to generate variable rate potato seed planting maps, which in turn, could add an extra 15% to crop value through reduced variability in tuber size. Jim also talked about the potential for using imagery for early identification of blight infection and predict its movement and levels of infection within a crop.