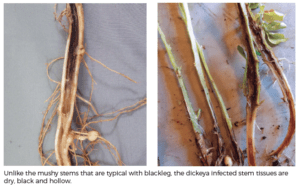 In 2005/2006, a growing number of cases of potato blackleg/top wilt in Northern Europe and Israel were found to be caused by a previously unrecognised Dickeya sp. frequently referred to as Dickeya sp. biovar 3, now known as D. solani.

Dickeya solani is a bacterial pathogen of potato thought to have crossed from horticultural crops in Northern Europe in 2005-2006. The earliest reports of disease on potato are from Belgium and the Netherlands, though it is now present in most European countries and Israel. D. solani causes blackleg and top wilt of the growing potato plant and soft rot of tubers. The wilt may be rapid as the soft rot moves from the infected tuber through the vascular system of the plant. In some varieties, wilting may occur without any apparent blackleg.

Symptoms caused by D. solani on potato, are similar to those produced by other plant pathogenic bacteria like Pectobacterium atrosepticum, P. carotovorum subsp. carotovorum, P. parmentieri (earlier classified as P. wasabiae), P. wasabiae and D. dianthicola and control is reliant on seed certification schemes. Losses as high as 30% have been recorded in crops grown in Israel. Direct losses to potato production from D. solani in Europe is due to downgrading or rejection of potatoes during seed certification. D. solani causes blackleg in seed potatoes and is a major block to export. Scotland has introduced a zero tolerance for blackleg caused by Dickeya spp. in its seed tuber classification scheme, using a system based on field inspection backed by laboratory testing. As the movement of latently infected seed is the principal infection route, measures to assure seed health are important.

Dickeya spp. can initiate disease from lower inoculum levels, have a greater ability to spread through the plant’s vascular tissue, are considerably more aggressive, and have higher optimal temperatures for disease development. There is also no evidence of varietal resistance in potato. However, they also appear to be less hardy than Pectobacterium spp. in soil and other environments outside the plant.

Several diagnostics protocols are available and are reliant on either conventional or real-time PCR methodology. However, the bacteria and disease are:

The most important pathways for the introduction and spread of the bacteria are: machinery/equipment with heavily infected potatoes spreading the bacteria to healthy tubers; infected water affecting healthy plants; bacteria spread by wind-blown rain.