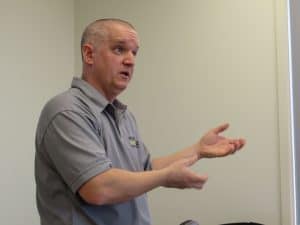 Operators of potato harvesters are being urged to leave nothing to chance when it comes to worker safety.

In response, Potatoes NZ held six health and safety workshops in August attended by more than 100 people, so workers could better identify, assess and manage work risks. Three workshops were held in Canterbury, as well as Pukekohe, Ohakune and Opiki (Manawatu).

People attending the workshops were told that the odds of being killed or maimed on a potato harvester this year were one in 173. In comparison, the odds of winning first division (matching six balls) in Lotto were one in 3.8 million.

Worksafe figures show that from January 2014 to March 2018 there were 12 serious harm injuries involving harvesters or grading machinery. Injuries included soft tissue, crush, fracture and amputation (fingers). Seven of these involved people being caught or pinned by the machine and in each of those cases the results could have been more tragic, Worksafe said.

It is recommended that growers ensure all guards are fitted, including full guarding of PTOs (power take off) and that as safe practice, guards are not removed unless machinery is stopped. 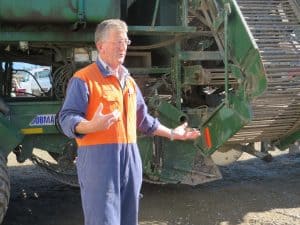 If machinery pre-dates guarding devices, it is recommended that growers contract an engineer to manufacture a guarding device that meets current standards.

Potatoes NZ has also engaged a health and safety consultant on a short-term contract to provide assistance to growers to help implement safe practice and improve worker safety culture.

Worksafe inspector Rob Bryson, of Timaru, told the South Canterbury workshop that if an employer or operator chose not to put a guard on machinery, “my question to you is ‘why is that not guarded’.” This would apply whether it was a cultivator, harvester or a PTO shaft on a tractor.

Answers like “it’s commonsense, or it costs too much” were not sufficient to meet health and safety regulations, he said.

“If you create a risk, the law says you must eliminate it. If you can’t eliminate the risk and the part has a function which is moving, turning, or lifting then you must minimise the risk.

“The reality of accidents is that you can’t factor out idiots. It doesn’t matter how many policies you have, people do silly things.

“You cannot factor out someone shoving their foot in to clean something out. So guarding removes that risk so you don’t have the ability to get yourself in trouble.”

If elimination was not possible, then substitution or engineering were the next options, such as covering a PTO shaft.

“Cost does eventually come into it, but no one wants workers injured.” 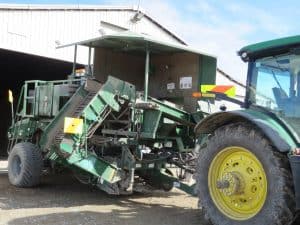 If Worksafe comes on site and identifies guarding or safety issues, it does not impose fines, but can issue an improvement or prohibition notice. Worksafe were not auditors and were available to provide advice. “I am called by quite a few farmers to come out to their farm and conduct an assessment,” Rob Bryson said.

“A drive for safety needs to come from the industry, not from Worksafe.”

Jack Mains, of Mainmech, told the workshop that the recent fatalities with this type of machinery all involved the operator (tractor driver) getting onto the machine when it was running. They had then become entangled while clearing something.  Similarly, serious harm accidents had all been attributable to inadequate guarding.

The fatalities and injuries all involved missing or no guards, or someone taking off a guard.

Owners and operators of machinery needed to question whether the way it was supplied by the manufacturer (or had been modified over time) was the best and safest way. Older machines were made to the standard of the time.

Justine Croft, of Potatoes NZ, said growers assumed that by buying new machinery, they would meet safety standards. “Unfortunately that is not always true. I know of brand new equipment that is not to standard. I suggest that you ask the seller ‘does it meet New Zealand standards’ and ask for proof of compliance.”

Jack Mains said that to prevent a person working on or next to machinery becoming entangled in the PTO shaft, all shaft drives and connecting mechanisms must be protected by guarding.

All moving parts where a person can become entangled must be guarded appropriately. Suitable systems should be in place so that if access to those parts is necessary, the machinery itself comes to a halt first.

Appropriate inter-locked guards meant they could not be opened or removed while the machinery was running. 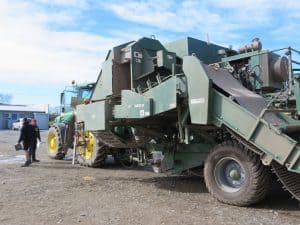 In a “trapped-key” system, an electric component in the tractor meant that the machinery had to be turned off before a guard could be unlocked and removed.

“The trapped key comes out of the ignition system in the tractor. This key (or several keys) is used to open or remove guards, but the key(s) cannot be removed until the guards are closed or replaced. All the keys have to go back into the tractor before it and the harvester can be started.”

He was aware that operators don’t want to stop tractors, because it also stopped the GPS. “It is something the industry will have to talk to manufacturers about.  You should be able to stop a tractor without spending five to 10 minutes getting the GPS up and running again.”

The tractor driver also needed to be aware if someone wanted to get off the potato harvester while it was moving, given the apparent risk of running a person over with this very heavy machinery. Depending on the machinery, they often could not see this from the tractor cab. An option is self-closing gates that switch on warning lights in the tractor and on the harvester when a gate is opened, Jack Mains said.