With hamburgers, chicken, fish, flavoured or covered in ketchup or mayonnaise, fries are enjoyed around the world, but a surprisingly few countries make the product. Will that ever change, asks Cedric Porter, Managing Editor of World Potato Markets.

It is less than 70 years since the first frozen fries were launched onto the US market. Now they make up a global market worth tens of billions of dollars and are eaten in more than 150 countries. But production is still concentrated in a handful of countries. World Potato Marketsestimates that 40 million tonnes of potatoes are processed commercially every year, with just three countries accounting for half that production – the USA (11 million tonnes), Belgium (4.5 million tonnes) and the Netherlands (4 million tonnes). There are only a dozen other countries who account for much of the remaining half of output.

Given that 90% of the world’s potato production is not made into fries, it would be easy to conclude that there is a lot of scope for other countries to start making them. But the economics of modern potato processing suggest that may not be the case. Plants cost 10 of millions of dollars to build and to justify that investment, processors need to know they can access the potatoes they need at an economic price.

Yield challenge
Most processors work to the rule that they need a pool of farmers who can regularly grow 40 tonnes of potatoes. To supply a modern processing plant with an output of 300,000 tonnes of product a year, there is a need for access to at least 15,000 hectares of land to grow potatoes a year. Most growers will want to grow potatoes on a rotation of one year in five. That means a plant must have access to 75,000 hectares of land that can grow potatoes and there are only certain regions of the world where that is possible.

The majority of the world’s potatoes are grown either side of the US and Canadian border and on a similar latitude in Europe. There are then pockets of production in China, India, parts of South America, Southern Africa and Australia and New Zealand. These regions share soil that support potatoes and have access to adequate water supplies.

Modern varieties, technology, fertiliser and plant protection products have enabled growers in North America and Europe to regularly deliver yields of 40 tonnes/hectare. That is starting to happen in other parts of the world too. One of the most notable areas is China. There, local companies have teamed up with North American and European processors to build processing plants to supply the domestic market. A similar strategy is being adopted in Argentina. This means that production continues to be dominated by established players.

New players can emerge
Despite the dominance of established names, new players can still emerge. The latest is Turkey. In the last year it has exported almost 60,000 tonnes of fries, up from less than 20,000 tonnes last year and less than 2,000 tonnes ten years ago. Investment and focus means that countries can become significant players over time. The clearest example of this is Belgium. In the early 1990s it processed just 150,000 tonnes of fries. Now it is the world’s second largest producer at more than two million tonnes, exporting twice as many fries as the USA.

World potato processing may be dominated by a handful of countries, but those countries face a challenge – their home markets are growing slowly, if at all. US processed potato production per head peaked in the early 2000s, but has now fallen by more than 10%, with any market growth coming from an increasing population rather than increasing personal consumption. It is a similar picture in Western Europe, with UK processed potato consumption per head also down by 10% since the early 2000s. The challenge of weak demand is even greater in Europe, where populations are growing slowly or even shrinking.

The established fry processing countries have been successful in developing new markets, with US fry exports increasing by 44% over the last decade, Dutch sales up 63% and Belgian up 155%. Only Canada, who relies on sales to the US, has seen little growth, although its exports are still over a million tonnes a year.

The largest growth over the last decade has been in sales to Eastern Europe, South East Asia and South America, where diets have been changing, favouring the consumption of processed potato products.

For more information contact Cedric Porter at prqevp.cbegre@ntevznxrgf.arg or call +44 1892 543444 or see www.worldpotatomarkets.com 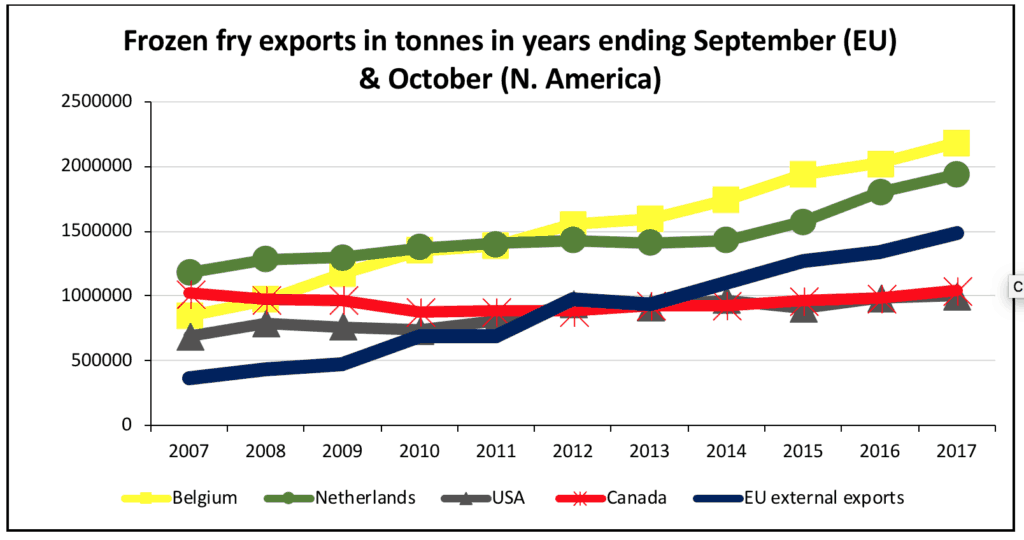