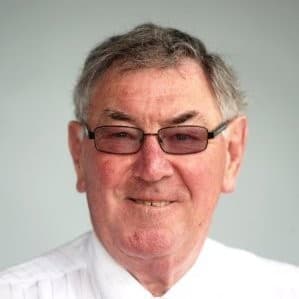 Ron Gall, the former business manager of Potatoes New Zealand, has been remembered as putting the industry on the world stage during his 21-year contribution. He passed away in May.

Former work colleagues and growers paid tribute to him as a champion of the potato industry who played an important role in their debates of current issues as well as organising and running a large number of highly successful conferences.

Ronald Hutcheson Gall, 77, was born in Aberdeen in 1944, where his first job was with Inland Revenue. After transferring to Glasgow he came to New Zealand as an assisted migrant in 1966 with £15 (about $30NZ) in his pocket. He worked for the Inland Revenue Department (IRD) in Wellington and married Gail in 1971.

He joined Vegfed as an executive officer in 1990, coming from Parliament where he was private secretary to a number of senior ministers.

“Along with the ‘commander’ Ken Robertson and I we made a great team,” said former Vegfed then Horticulture New Zealand chief executive, Peter Silcock. Ken Robertson was a former executive officer for the Fresh Tomato and Potato sectors, as well as manager for the Process Vegetable Product Group and the Fresh Vegetable Product Group. Peter Silcock went on to work with Ron for 20 years and was a speaker at his funeral in Wellington in late May.

“Ron initially looked after Fresh Vegetables and then the Potato sector which later became Potatoes NZ, where he remained for 18 years. He also used his fantastic event management skills to manage Vegfed’s Conference for many years.

“Ron had an enormous capacity for work. He was passionate and enthusiastic, he was a thinker and loved to challenge the status quo,” he said.

“He loved the vegetable industry and got to meet and talk with most growers around the country. I feel privileged to have worked with Ron and benefited from his knowledge, support and friendship. He was a unique person, a true champion and loyal friend.”

Stuart Wright, chair of Potatoes New Zealand, acknowledged both his contribution and commitment to the industry as well as celebrating his industry foresight at that time.

“His call for change was key to the potato industry’s continued success,” he said.

He had left Potatoes New Zealand a better place.

Terry Olsen, former chair of Potatoes New Zealand, who worked with Ron closely over seven years, and also spoke at his funeral, said he believed Ron’s presence was integral in determining the potato industry’s economic future. Not only did he understand the industry, he’d built up tremendous networks over the years.

This came into play very much on the world stage with Ron becoming a director and international advisor of the World Potato Congress (WPC).

“Ron was dedicated to the potato industry and in helping to make the WPC the world-renowned organisation that it is today,” president Romain Cools said.

He showed commitment and loyalty over his 13 years of involvement, which would be long remembered with his years of experience in the potato sector being a great asset to the WPC board.

“He was instrumental in putting on a fantastic congress in Christchurch, New Zealand, in 2014 and assisted WPC in maintaining its reputation as a world class networking organisation.”

Pukekohe potato growers were unstinting in their praise of Ron and his long involvement serving their industry.

“Ron stood as a kauri tree in the potato world,” said Kevin Balle from Balle Brothers.

“His passion for the industry and the humble potato was equal to, or greater than that of many growers.”

And Kevin Wilcox from A S Wilcox, who attended his funeral, remembered him as “a real champion for the vegetable industry, our people and our products”, who served the potato industry with great passion and a positive growth mindset.

“Even when a bit naughty he was well intentioned and always wanted the best for the people he served.”

Ron had wide-ranging interests outside of work as well, becoming secretary of the Taxes Cricket Club and playing rugby for them. He also coached Taxes men’s and women’s basketball teams, despite having never played the game, and managed the Wellington Women’s representative basketball team for a time.

He was chairman of the Onslow Cricket Club, a member of the Wellington Cricket Association Management Committee, then vice-president.

He also volunteered for 12 years as a cruise controller, helping cruise ship passengers find their way around Wellington.

He said that if he was to write his own epitaph it would be, “He did his bit”.

His is survived by his wife, Gail, son and daughter in law Hamish and Rita (Portugal), daughter and son in law Andrea and Elliott (Wellington) and his grandchildren Lucas, Emily, Cameron and Mac.