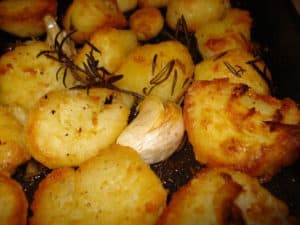 Potatoes will star on plates at the grand final of the National Secondary Schools Culinary Challenge on the 29th August 2017. Students will use pumpkin in their entree and the main will feature two fresh New Zealand grown vegetables and potatoes as the starch.

Steve Sheppard from Potatoes NZ said ‘Potatoes New Zealand are delighted to be a major sponsor of the National Secondary Schools Culinary Challenge (NSSCC). The entrants represent the next generation of top chefs and culinary leaders, which is why it’s so important we all get in behind and support these students. We wish the competitors all the best of luck for the completion and look forward to see how their potatoes will be prepared’.

“5+ A Day are right behind this competition as it is imperative we teach the next generation to cook healthy meals full of fresh fruit and vegetables. This cannot be underestimated in the role it has to play in improving the health of all Kiwis” said sponsor Stephanie Wrathall from the 5+ A Day Charitable trust.

Teams of two students from schools throughout New Zealand will compete at the final on 29th August at MIT. Teams competing are

Each team has won for their school a $500 Bidfood voucher, a $200 Southern Hospitality voucher, travel assistance to compete at the NSSCC Grand final and attend the New Zealand Culinary Journey. They will receive two chefs jackets to wear during their competition and culinary journey, which includes a Master Class and workshops with some of New Zealand’s top chefs and a tour of the kitchens at Sky City.

The National winners will each receive a $1,000 gift pack from vegetables.co.nz and City & Guilds and a $2000 scholarship towards their study of a City & Guilds International Catering Qualification.

The winning school will receive a $1,000 voucher from Bidfood, an ANOVA Precision Cooker and a Blue Seal Range Static Oven worth $7,000.