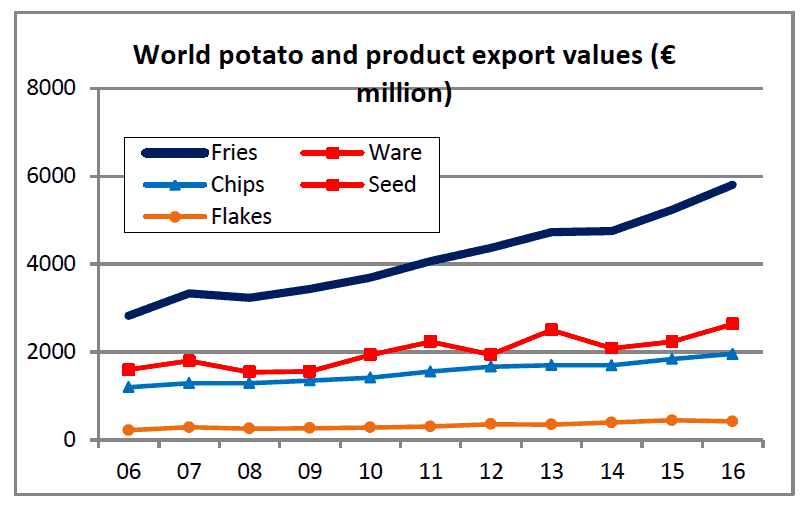 World potato trade surged in both volume and value last year to record levels, with exports of potatoes, potato products, seed and sweet potatoes generating €12.042 billion compared with €10.899 billion in 2015. The figures are based on trade statistics for between 64 and 86 countries depending on the product and the direction of trade. Volumes and values had faltered in 2014 but the growth is now accelerating. There are however some uncertainties ahead such as trade restrictions, rising freight costs and increasing product prices.

Fries were again the star performer last year, with exports generating a record €5.806 billion. North American exports had faltered in 2014, partly because of the US west coast ports dispute, but have risen strongly over the past two years to the equivalent of €1.838 billion. Exports by the five leading EU countries (including intra-EU trade) generated €3.489 billion, almost 15% more than in 2015. These seven countries have a stranglehold on world fry trade, accounting for almost 92% of the world export total.

Next in importance after fries are ware potatoes and HS 200520 dehydrated products, which include chips/crisps. Ware exports fluctuate according to regional shortages and surpluses but the value trend is upwards while there has been steady expansion of HS 200520 exports to €1.953 billion last year. Seed trade values fell back in 2015 and failed to recover last year.

The growth in the unit value per tonne of both product imports and exports has been relentless since 2008 while ware trade prices fluctuate, increasing in 2010 and 2011 because of Russian demand and again in 2013 following a general decline in harvests in 2012. Only in 2007 did product prices show fluctuation and this resulted from the disastrous EU harvest in 2006

Imports of HS 200520 chips/dehy earned an average €2026/tonne last year while exports of that product earned €1874/tonne. Unit value of flake imports and exports also exceeded €1000/tonne while the average for flour trade was close to this figure. Fry export prices have been increasing steadily and exceeded €800/tonne last year. Ware trade values were just above €260/tonne.

The Netherlands bestrides the world seed potato industry like a colossus, accounting for 55.6% of the total volume of this trade and 57.4% of the total value, but had a disappointing season last year.

World exports had expanded sharply in 2013 and 2014 but fell by 6.2% in volume and by 8.2% in value in 2015 and lost more ground last year. Dutch exports fell by almost 7% in volume but other EU exporters – mainly France, the UK, Germany, Belgium and Denmark – increased their sales by 2.7%. High seed prices from the 2016 harvest do not bode well for trade prospects in 2017, although Dutch exports are holding up well.

Imports by the 28 EU countries recovered after the 2015 decline but demand from African countries (primarily Egypt, Algeria and Morocco) fell after the 2015 increase. These two groups accounted for 81.5% of the total volume of imports.

Canada and Mexico are by far the largest markets for US seed exporters while 94% of Canada’s exports of 79 549 tonnes went to the USA. Secondary markets for Canada were Uruguay and Venezuela. The average unit value of world seed exports has been remarkably stable and averaged €452/tonne last year.

World exports of HS 110813 potato starch are dominated by Germany, the Netherlands and Poland. The trade faltered in 2013 and 2014 but made a strong recovery in 2015, although exports last year slipped to €421.910 million and imports fell to €554.180 million. Puzzlingly, France and Denmark do not record any starch exports. 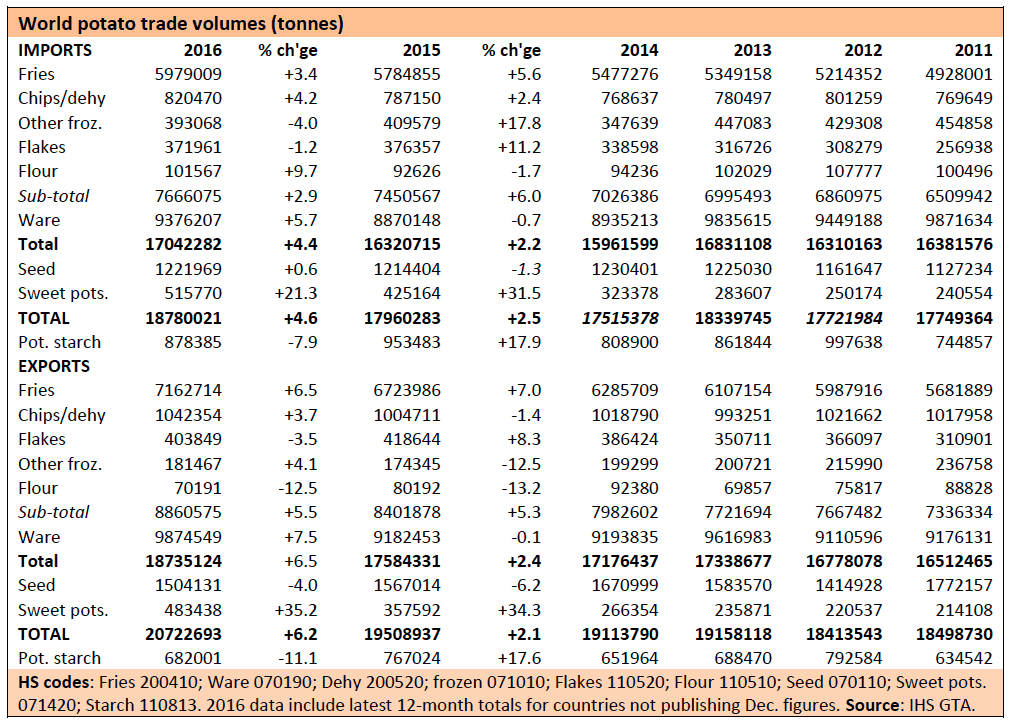