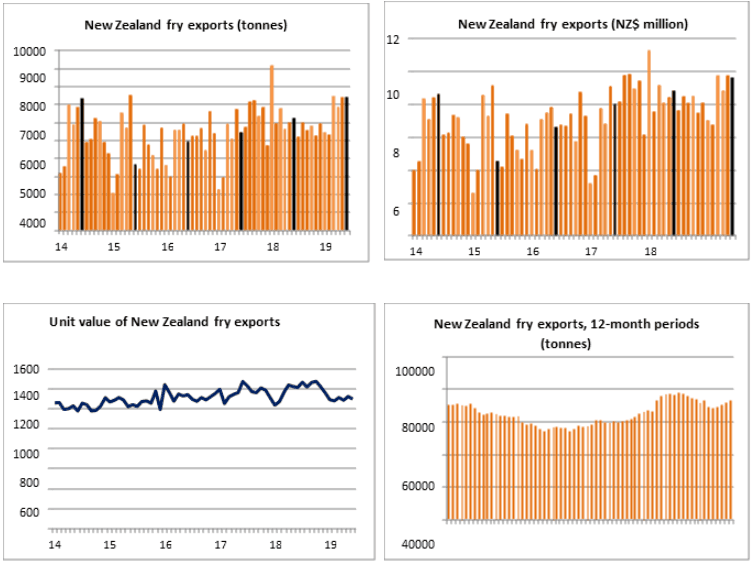 Strong demand from key South East Asian markets has helped New Zealand consolidate its fry export performance for the fourth consecutive month. Since March, total exports for each month have been above or close to 7 000 tonnes, with a particularly strong performance from markets in Malaysia and Thailand. The Philippines has also weighed in.

Total sales for June reached 7 384 tonnes, 18.7% up on a year ago. New Zealand’s second largest buyer in June was Malaysia which took 1 347 tonnes. In the four months March – June this year, Malaysia has taken 2 799 tonnes compared to 401 tonnes for the same period last year. Malaysia is New Zealand’s eighth largest export market, and since 2016, there have been no export tariffs on 99.5% of New Zealand’s exports. Thailand took 2 958 tonnes during the March to June period this year, compared to 1 341 tonnes the previous year.

Processed potato product sales to the Philippines in June were up 236% to 824 tonnes compared to the previous year, despite the Philippine government’s measures to encourage home potato processing by increasing the low tariff volume on imports of chipping potatoes to 25 000 tonnes.

All this means that sales for the 12-month period to Malaysia are 815.7% up on the previous year. Sales to Thailand for the year are 57.2% up, and sales to the Philippines for the 12-month period are up 13.8%. Everything in the New Zealand potato patch should be rosy – but the reality is sales to these markets are needed to compensate for falling in sales to New Zealand’s biggest trading partner, and biggest fry buyer, Australia.

Exports to Australia in June were 38.8% down on a year ago at 2 776 tonnes. April and May had recorded sales close to the previous year, but 2 776 tonnes is an unwelcome drop. Sales for the 12-month period to Australia are down 17.6 %, and it means total New Zealand fry exports for the 12-month period are down 5.8% at 72 570 tonnes, despite such a strong four-month spell selling in South East Asia.

Crucial to New Zealand’s future exports hopes to South East Asia market will be parity of price to the Australia market. It appears New Zealand’s SE Asian customers no longer expect to pay a substantial premium. A year ago, fries were being sold to the Philippines and Malaysia for NZ$500 (US$332/t; €298/t) more than the Australians were paying. The Thais were paying a NZ$600 premium (US$398/t; €357/t).