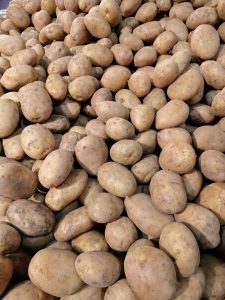 Vegetables are so hot right now.

And it’s not just because, we’re told, one in ten kiwis is now always or mostly eating a vegetarian diet.

That’s according to a recent Colmar Brunton report, Better Futures.

That shift to plant-only eating, the report says, is a sign of an increasing commitment towards sustainable living.

What else are we doing? Ditching plastic bags in favour of re-usable bags (8 out of ten of us does this now). It’s fair to say the latter behaviour has been driven heavily by the upcoming ban on single-use plastic bags, and the phasing out of plastic bags in the main supermarket chains. We’ve been forced into action.

Plastic bags are the tip, really, of the sustainability iceberg. And the supermarket is the ocean, surely, where that iceberg sits.

Forgive the laboured metaphor, but I’m trying to highlight that the next thing we’re going to have to deal with, I reckon, is the vast amount of plastic packaging that encases the food we buy.

Since consumers can’t currently recycle our soft plastics, this has really been highlighted to me. I used to stockpile my plastic until I had a bag full to return to the supermarket; now I am forced to throw it out, to go to landfill. There’s a lot of it – and I am actively trying to minimise it! It is amazing to me how tricky it is to buy food – or anything – in the supermarket without plastic packaging encasing it.

But wait a minute: the only part of the supermarket where this isn’t the case is the produce section. Here at least, it’s still possible to buy ‘naked’ food, and making those vegetables more naked is super-hot.

In fact that’s the basis of one campaign in south island New World supermarkets. In January the NZ Herald reported that sales of some vegetables soared by up to 300 per cent following moves by some of its supermarkets to ditch plastic packaging.

In a project labelled ‘food in the nude’, pioneered by the New World store at Bishopdale in Christchurch,  abandoning plastic wrapping for almost all of their fruit and vegetables has led to stunning sales figures. Spring onions, silver beet and radishes have all shown increases of around 300 per cent. It’s a win-win: the food that’s best for us is also the least packaged.

While it’s by no means a simple equation – the lack of packaging must be balanced with food waste, we’re told, as in the case of delicate produce like cucumbers – there’s no doubt Kiwi shoppers want to buy food with less plastic.

This is good news for produce that’s typically and traditionally sold without plastic. Potatoes, for example, are bought loose, very often. Yes, this is tricky if you want to brand your potatoes and extoll their virtues to shoppers. But all hail the cardboard box: another traditional packaging method that’s recyclable and sustainable. I will consciously buy spuds in a box over spuds in a plastic bag. And I bet I’m not the only one.

If you’re a producer or grower of food and you currently use plastic packaging, I am sure you’re probably already exploring alternatives. The writing is on the wall on this, we can all see.

* Niki Bezzant is a food and nutrition writer and speaker. Follow Niki @nikibezzant