Home > News & Info > Articles > Is there such a thing as perfect roast potatoes? 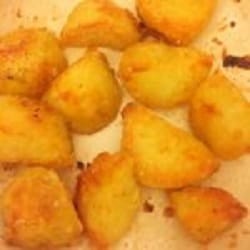 Perfect roast potatoes. Few food topics I’ve posted on my Facebook page have elicited such adamant and varying opinions. It occurred to me during recent heated discussions on this that I was lucky my Facebook friends were not all in one place; people were really very exercised. I wonder: are potatoes the new politics?

Roast potatoes (along with hot chips, their close relative) are a great example of the holy trinity of tastes humans love: carbs, salt and fat. I suspect that’s why we’re so opinionated about them; they represent all that is delicious about sitting down to eat. Pity the poor paleo dieters for whom potatoes are on the banned list. You just can’t get as excited about roast kumara.

Among my foodie friends there were almost as many preferred methods of achieving holy grail roasties as there were people. Broadly speaking, though, they fell into two camps: the “just use the right potatoes and a hot oven” school, and the more elaborate but intriguing methods involving parboiling and ‘roughing-up’ the potatoes before roasting. At this point they fell into sub-camps involving – or not – the use of seasoned flour and various amounts of heated – or not – fat. 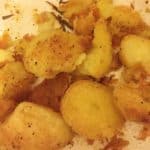 I surveyed the methods of famous cooks. Jamie Oliver’s method is often-quoted; he may be the person who popularised the ‘roughing-up’ approach. The theory here is that the rougher the outside surface of the potatoes, the more they’ll catch the fat and crisp up when exposed to heat.

In his Perfect roast potatoes (pictured left), Jamie advocates parboiling the spuds for 7 minutes before steam drying for 3 minutes. He then ‘chuffs up’ the potatoes to rough the outside surface, and tosses them in fat – olive oil, butter or goose fat. They go into a hottish oven (190C) for 30 minutes until ‘three quarters’ cooked.

Here Jamie does something that departs from other methods I found. He squashes the potatoes with a masher, adds more oil and flavouring, and roasts for another 45 minutes. 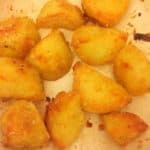 Nigella Lawson goes for a different approach for her Perfect Roast Potatoes (pictured right), and this seems to echo many of my friends. She parboils, then sprinkles with semolina at the roughing-up stage. She also pre-heats the fat – 2 cups of goose fat for 2.5kg potatoes – until it is what she calls ‘frighteningly hot’ before adding the spuds into the dish for roasting. She uses a very hot oven, 250C, for about an hour. Nigella’s spuds look delicious; as if they’ve been deep-fried (which they practically have been, looking at that fat quantity).

Heston Blumenthal does it differently again, running them under water for 5 minutes at the start of the process to get rid of excess starch. He boils his potatoes until ‘very soft’ (25-30 minutes) before heating quite a lot of oil – a layer 5mm deep – and roasting the potatoes for an hour and 15 minutes, turning every 20 minutes in a 180C oven. This is serious commitment to roasties.

As someone who had always achieved, I thought, pretty good roasties by simply putting Agrias with oil in a hot oven, I found myself more and more intrigued. It was time to buy a large bag of potatoes and get experimenting.

In a commitment to the scientific method, I used the same potatoes (Agria); the same dish and the same oil for all my potato experiments.

First I tried Jamie’s method. He was a little vague in terms of how much oil to use. I had to guess what a ‘good lug’ of oil is, and also what size ‘twice the size of a squash ball’ is, having never played squash. However, everything else went pretty well. This method produced quite busted-up potatoes, as you’d imagine with spuds squashed with a masher. It produced a satisfying amount of very crispy, crunchy small pieces, and the spuds that stayed intact had a crunchy outside and soft inside. They were a little oily, which I didn’t love, but overall these were well worth the wrist burn I sustained in making them.

Next, I thought it worth a foray into the flour-and-hot-fat arena. I decided Nigella’s recipe was a little inaccessible, given the goose fat. But I went with her basic approach of pre-heating the fat. I didn’t want to risk an oven fire by heating oil for 30 minutes as per her instructions, so I followed a BBC Good Food method and heated the olive oil (NZ EVOO, as per my other tests, and which has a high smoke point) for about 5 minutes. I parboiled for 7 minutes again, and roughed-up as per Jamie. Then I sprinkled with a teaspoon or so of plain flour, and roasted at 200C for about 50 minutes.

These potatoes were exceptionally golden and crisp. The flour gave them an irresistible crunchy coating and the inside was soft and fluffy. We had an early front-runner. 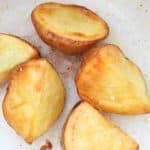 My last two experiments involved leaving the skins on the spuds. The skin is where a lot of the goodness in a potato is, including the vitamin C and fibre. I’m used to not peeling and I wanted to see how my old method would shape up, so I first tried that: just scrubbing, drying and cutting, coating with oil and popping into a hot oven for 50 minutes (pictured left).

I’m not too proud to say that these are now my least favourites. They were golden and the outsides were crunchy. The inside was fluffy and soft. But they didn’t have the crunch of the other methods, and the skins, although flavoursome, were a little leathery by comparison. 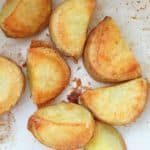 The next version was more successful: skins on, parboiled and roughed-up (pictured right), then the same oil/heat/time combo as before. These were definitely crunchier, and stayed so as they cooled. Parboiling meant the skins separated from the flesh a little and crisped up in quite a satisfying fashion. I liked these spuds a lot.

So, after giving my oven a workout, incurring injury and eating many more than my fair share of potatoes, what have I learned? Here are what I now believe are the key points in achieving the perfect roast potatoes.

Niki Bezzant is a renowned writer, editor, speaker, eater and Editor-at-Large for Healthy Food Guide. This is the first of a series of monthly blogs Niki will write for Potatoes New Zealand. You can follow Niki at www.nikibezzant.com