Potatoes are a high satiety index food, approximately 2.5 times that of comparable carbohydrates such as rice and pasta.  The higher the satiety index the greater the feeling of fullness for longer.  Refer to our Potato Nutrition Booklet for more information.

What is the satiety index?

The satiety index (SI) was developed a researcher at the University of Sydney to compare the ‘feeling of fullness’ of a range of foods. Hunger, appetite and satiety regulate the amount of food we want to eat and how much we consume.

What does satiety mean?

Satiety refers to the physiological and psychological experiences of fullness that come after eating or drinking.

It is influenced by the volume of food consumed in addition to its water, dietary fibre and macronutrient (protein, carbohydrate, fat) content. The higher the satiety index the greater the feeling of fullness for longer.

Where do potatoes come on the satiety index?

What does this mean?

This means that potatoes (e.g. boiled, baked, mashed) have a key role in weight control by helping the ‘eater’ to feel fuller for longer – making them less inclined to eat between meals.

Even more encouraging is that research shows smaller amounts of foods are consumed at the meal following the consumption of a high SI food.

Nutrition information of a cooked potato 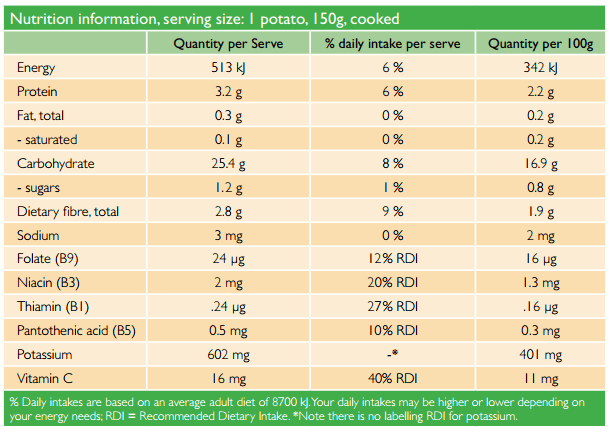