Project PT16002 is a three-year project examining if different field soils affect the development of powdery scab in potato crops across New Zealand. In collaboration with scientists, A S Wilcox and Sons collected soil samples to study links between soil biology and powdery scab, looking to assist growers in selecting those soils as preferable locations for ware potato production. 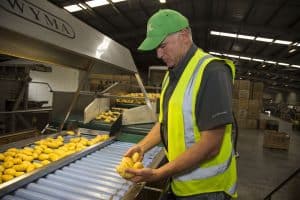 Bryan Hart is always thinking outside the square when it comes to potato production.

As Senior Crop Manager of one of New Zealand’s biggest potato growing operations, A S Wilcox & Sons, Bryan is responsible for planning and managing its potato program throughout the supply chain. This involves planning the seed requirements of exclusive varieties as well as the agronomic aspects of supply, through to working closely with the commercial team to meet customer needs.

Based in Pukekohe in the Auckland region of the North Island, Wilcox is a leading supplier of washed premium potatoes in New Zealand, and Bryan says skin finish is critical to achieving a successful crop.

“It’s critical to focus energy in regions growing potato seed crops, otherwise we, as growers, are just inoculating new land all the time with this disease.”

“Powdery scab is the scourge of ware crop growers and costs the business a lot of money every year. Current chemical controls aren’t effective to meet our customer demands (of perfect skin finish) and increasing knowledge of the disease is fundamental to developing long-term solutions,” he says.

To investigate ways to reduce the effect of powdery scab disease (and its pathogen Spongospora subterranea), Bryan and his team reached out to the New Zealand Institute for Plant & Food Research. Led by Richard Falloon, a project is being conducted to determine if different field soils affect the development of powdery scab on potatoes. Phase two of the project will investigate whether soil physical, chemical and/or biological characteristics influence this disease. 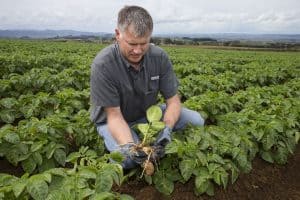 During the project, Wilcox has collected soil samples from a number of farms with a range of cropping history to help determine if there was a link between soil biology and disease presence and expression in potato crops.

“We are interested in this because currently there are few tools of limited effect at managing the disease, especially when you receive seed lines that are infected or you grow varieties that are highly susceptible to the disease,” Bryan says.

Results from the project identified different levels of several physical and chemical factors from similar soil types including soil texture, organic matter, and fertility and nutrient availability. Bryan says this raises questions around what makes these soils different.

“It is very early in the piece, however if there are biological organisms in those suppressive soils, then long-term it may be possible for either selecting those soils as preferable locations for ware potato production or potentially even for the manufacture of those organisms to be incorporated in-furrow at planting.

“If these facets turn out to be realised then I would encourage all growers to adopt them.” 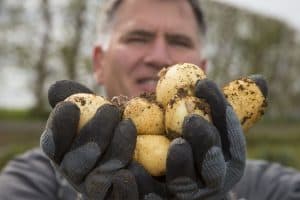 Collaboration in science is always valuable, according to Bryan. While the real benefits of this project have yet to make it to a practical level, he encourages his Australian counterparts to undertake a similar project.

“The soil types there will be different and learnings can be shared across borders for the benefit of all,” he says.

“It is critical to focus energy in regions growing potato seed crops, otherwise we, as growers, are just inoculating new land all the time with this disease.”

This grower profile first appeared in Grower Success Stories, a levy-funded booklet published by AUSVEG to promote real results from levy investment, and was featured in the AUSVEG Weekly Update published 11 December 2018. If you’d like to subscribe to receive AUSVEG publications, use their online subscription form!