In her latest blog Niki Bezzant discusses how he replied on potatoes (“a budget star”) whilst completing the Tear Fund’s Live Below the Line challenge. Potatoes really saved the day for her…

For the past five days I have been eating on $2.85 a day. That’s the international poverty line, as defined by the United Nations. Over 700 million people around the world live on less than that.

It has been, to say the least, an interesting exercise. As a food writer, used to creating and costing recipes, I thought it would be tough, yes, but not too tricky. Turns out the theory was a little different from the reality. My meticulously planned menu, costed to the nearest cent, looked good on paper, but in real life it was monotonous and not particularly satisfying.

For me getting as close as I could to nutritional completeness was important this week. So while I could have loaded up on cheap white bread and rice, I wouldn’t normally eat those things. So I tried to stick to foods that were already part of my healthy diet. Eggs were non-negotiable; I eat them daily and they’re cheap, useful protein. My other staples were brown rice, lentils, plain yoghurt and good old potatoes.

Potatoes are a budget star. I bought mine for the week for just $1.50 a kilo; the most expensive ones are still less than $5. As well as being filling – something not to be understated when you’re eating at a subsistence level – they’re very, very versatile.

I couldn’t afford a loaf of bread in my weekly budget of $14.25, so potatoes were an alternative carb for me for breakfast, lunch and dinner. At breakfast time I grated one, added salt and pepper and made a crispy potato rosti. Topped with an egg, this was a satisfying start to the day. I also ate this for dinner one day.

One of my main meal options was a Potato and Pea Curry. A version of an Indian staple, this simple dish of potatoes fried in turmeric and then mixed into a tomato-based spicy sauce was tasty and satisfying. I served it to the team at Healthy Food Guide as a fundraiser for the challenge, and it got raves and requests for the recipe. Which shows you that food doesn’t have to be fancy to please a crowd.

Potatoes also made simple vege fritters, combined with tinned corn, frozen spinach and a little carrot. Leaving the skins on in all of these scenarios made sure I got as much of the useful vitamin C and fibre as possible from my spuds.

You can’t live on potatoes alone (that guy that did a potato-only diet for a year was crazy; and by the end of it I am sure he would have had some problems). But including potatoes when you’re challenged with the food budget is a smart way to save. 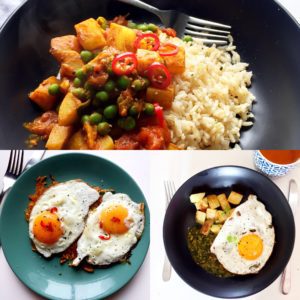