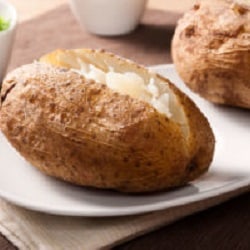 The launch of a new lower-carb potato recently has got me thinking about potatoes and carbs.

If media reports are to be believed, every second person is cutting carbs, going paleo or embracing a vegan lifestyle. It can certainly seem that way to me, at times, in the world I work in, where I’m exposed to every nutrition trend that comes along. It can at time feel like hardly anyone is eating in a way where they’re not excluding something.

However, this may not, in fact, be the case. Some interesting new consumer research commissioned by Fonterra shows that Kiwis are a pretty sensible bunch when it comes to fads, trends and special diets. In their survey, just 8% of people said they were avoiding or limiting carbohydrates. A hearty 67 per cent said they do not avoid any foods or exclude any food groups.

This seems to fit, anecdotally, with what people tell me when I go to speaking engagements or do media work. Everyone knows there’s more advice about around healthy eating than ever before. But most people find it confusing rather than helpful.

So what does this mean for potatoes? I’d say the news is, on balance, good. That 67% who say they’re eating everything are still embracing the spud, it would appear. When I did a guest slot on Radio New Zealand with Jesse Mulligan recently to talk about my roast potato experiments (see my previous blog here) the segment generated more feedback than any food segment ever before. People are passionate about their roast potatoes. They care about getting them as delicious as possible. These people are not avoiding carbs, and certainly not potatoes. 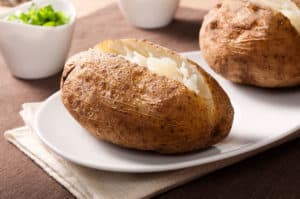 That said, there is a lot of ‘noise’ about low-carb diets out there, particularly in the social media space. The paleo and low-carb-high-fat diet trends have persisted over the past few years, longer than I thought they might, to be honest. It’s not hard to see that the message that carbs are ‘bad’ has crept into the wider public consciousness in certain parts of the population.

There’s also a recognition in the mainstream nutrition community that not all carbs are equal. Nutritionists and dietitians now talk about the quality of carbohydrates we eat being important, rather than simply quantity. And there’s acknowledgement that some of us will do better on a lower-carb (though not necessarily low-carb) diet. A smaller person working in a mainly sedentary job won’t need the same amount of carbohydrate foods as a larger person in an active job.

Potatoes are a higher-GI (glycemic index) carbohydrate, meaning they are digested quicker than other carbohydrate-containing foods. The GI can vary a bit though, depending on the variety of potato and how it’s been prepared. A plain baked potato with the skin on will be better, generally speaking, than a mashed potato. And the rest of the meal makes a difference, too.

So as always, we need to look at the bigger picture when it comes to potatoes and carbs. When we’re eating a healthy diet full of colourful vegetables, quality protein and healthy fats, potatoes can be a healthy and delicious addition. If we’re eating nothing but meat and mash, not so much.

I think there’s some education work needed to get these subtle but important messages about potatoes across. A low-carb potato will certainly appeal to some, and it’s great that we have another choice in the market. But consumers need to know that all potatoes can be healthful.

Niki Bezzant is a renowned writer, editor, speaker, eater and Editor-at-Large for Healthy Food Guide. This is the first of a series of monthly blogs Niki will write for Potatoes New Zealand. You can follow Niki at www.nikibezzant.com