Potato virus S (PVS) is a virus causing very mild (often not visible) symptoms in a potato crop. Its effect on a crop may be enhanced with a co-infection (mixed infection) with other viruses such as Potato virus Y (PVY) and Potato Virus X.

PVS is particularly contagious and may be transmitted mechanically, for example from tuber to tuber through damage, by equipment passing through crops, or from tuber cutting.  The virus is also transmitted by aphids. Psyllids are not known to transmit potato viruses. Reinfection of seed lines is a concern, as we have found that re-infection can occur from zero to 20-50% over one seed generation.

Research in The Netherlands calculated that if 100% of plants were infected with either PVS or PVX there would be a yield reduction of 10%.  In Poland PVS infection decreased yield of tubers by between 11 and 20% compared with that in healthy plants. In the Philippines reductions in yield due to PVS were recorded at between 4 and 9%.

Similarly in the USA tuber numbers and specific gravity of the tubers were unaffected by mottle and latent strains of PVX or by PVS, whereas PVX alone and latent PVX + PVS reduced tuber size and yield between 2 and 5%. In Czechoslovakia, yields fell by 15-34% and the number of tubers by 16-25.7%. From the figures referred to above, an average value of 12% loss in yield can be calculated.

In the context of a striving to improve potato yields from 50 – 60 t/ha to 80 or 90t/ha under the ‘Potato Yield Gap’ project underway here in Canterbury, however, this potential loss is a concern.  It is essential in this context that seed tubers planted must be of the highest virus health.  In the Yield Gap experiment, lines tested subsequent to planting were estimated to have 10-100% incidence of PVS. Other viruses were also present but at a lower overall incidence: PVX (1-4%), PVY (1%), PVM (1-100%), PLRV (1%).

How is reinfection with PVS occurring so rapidly?

Cutting seed is known to spread mechanically transmitted viruses. Attention to the use of suitable sanitisers on cutters between lines and at breaks to minimize transmission is essential.  Other contributors to mechanical transmission can be through sprout damage caused by rough handling, especially wet storage or planting conditions and the movement of irrigators through seed crops.  A further contributor to virus spread seems to be the increased movement of spray equipment through crops in response to the tomato potato psyllid (TPP) outbreak.

It is advised that spray lanes or tramlines for irrigator movement are established to minimize this method of transmission.  Any equipment moving through a crop needs to be clean before it enters.  Similarly, always move from known healthy blocks to ‘doubtful’ or less healthy (e.g. always move from pathogen-tested Generation (G1), to G2 then to G3).

A further measure to reduce virus spread is the isolation of seed crops from other fresh or processing crops. In Canterbury competition for cropping land has meant that the strict isolation of seed potatoes from others has relaxed in recent years. Strict line isolation reduces the risk of cross contamination. 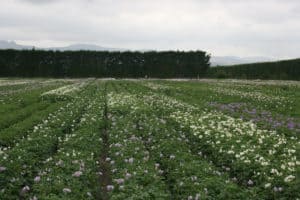