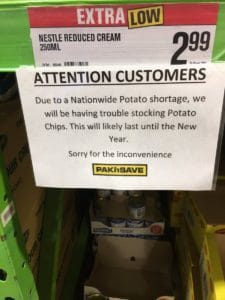 On Saturday, 14 October Angela Meyer visited her local Pak ’n’ Save to purchase groceries. As she leant forward to grab her favourite pack of potato crisps there was a void; and in its place a sign which read “Due to a Nationwide Potato shortage, we will be having trouble stock Potato Chips. This will likely last until the New Year.”

She posted a picture of this sign on Twitter, and because there was no news because Winston was still deciding which party to go with, the tweet went viral. Suddenly the phones were ringing with media enquiring about a national potato shortage. Chief Executive Chris Claridge was bombarded with media interview requests.

Chris explained that potato supplies were down, but it was the crisping potatoes that were in the greatest shortage. It was at this time it became clear that, whilst most people were aware that the record rain levels had reduced vegetable crop yields, few understood the difference between crisping potatoes and fresh (table) potatoes.

Once public understanding of the difference between crisping potatoes and fresh potatoes grew, people were able to relax in the knowledge they would have fresh new season potatoes to enjoy over summer and with the Christmas dinner.

The media then started investigating which crisps, from which outlets would be most affected by the perceived potato shortage… The majority of crisp produced in New Zealand are made from crisping potato varieties, but other producers make their crisps from fresh potato varieties (e.g. Agria).

At this point scrutiny the questions was re-asked as to whether there was a potato shortage or not. By this stage ‘Chipocalypse’ was trending on social media and Potatoes New Zealand were experience record levels of social media engagement, particularly through Chief Executive Chris Claridge’s Twitter account (@ClaridgeChris).

Media enquiries were coming from across the ditch in Australia, then the UK (Guardian newspaper and BBC), from America (LA Times) and even Slovenia! When all was said and done Chris had completed 17 media interviews and 8 live interviews.

To get a more in-depth overview of the issue, please take 8 minutes out of your day to listen to the insightful interview on Radio Live.

So… What does this mean to growers and the wider industry? Well it’s all to easy to point the figure of blame, but nobody can control the weather. While potatoes are grown across the country, the worst hit areas are Horowhenua, Matamata and Pukekohe because of a 25% increase in rainfall. The paddocks haven’t dried out so growers can’t harvest the crop, or prepare for planting.

The good news to come out of this is that it’s clear potato crisps are still New Zealand’s favourite snack and something New Zealanders view as a part of our culinary culture. So don’t expect demand for crisps to dry up anytime soon.

Thank you to all the growers out there, especially those who’ve been rigging up lighting solutions to allow them to work through the night to get potatoes lifted and new seed potatoes planted.

To support New Zealand growers, make sure you look for the New Zealand made sign and details on the packets when you next purchase crisps.