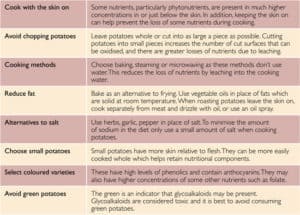 There are a number of decisions that you can make in order to maximise the nutritional benefits of potatoes. The list below shows how to ensure potatoes remain a healthy choice.

Potatoes are so versatile. Potatoes can be the hero in a dish on their own, or an integral part of a meal, or accompany other food for everyday meals and special occasions.

There are a number of potato varieties to choose from at any time of the year – choose the right potato for its end use. Note that the right potato depends on growing conditions, weather and time of year.

Detailed below are classic potato dishes.

Dinner: A la carte or Buffet

What is a new potato?

New potatoes have a delicate flavour and are usually available from the end of winter. They are young potatoes and unlike their fully grown counterparts, they keep their shape once cooked and cut. They are also sweeter because their sugar has not yet converted into starch, and are therefore particularly suited to salads.

Choose new potatoes that are firm, dry and blemish-free. Unwashed potatoes last longer as the dirt protects them from bruising and general deterioration.

How to prepare new potatoes

You don’t need to peel new potatoes; just rinse to remove any dirt and cook whole. To boil, place potatoes into a pan of lightly salted water, bring to the boil, simmer until tender (about 10 minutes) and drain. Dress new potatoes as soon as they are cooked to help them absorb the flavour of the butter or oil (this way you will also use less).

How to store new potatoes

Store new potatoes in a cool, dark, well-ventilated place. They should be used within a few days of purchase.

After years of consumer confusion about what a new potato is, and after extensive industry-wide consultation, Potatoes New Zealand has defined a new potato as ‘a young potato characterised by soft skin, so delicate it can be easily flicked off with your fingers’. If the skin cannot be flicked off, then the potato is not a new potato.

Traditionally potatoes were peeled and parboiled before roasting to give a crunchy outside. However, the skin can be left on and the potatoes cooked a little longer.

For roast potatoes with a difference

There are many opinions on how to get the perfect mash, however, it comes down to personal preference.

For best results use a potato labelled as baking*, however, almost any variety can be baked. Floury textured potatoes will have a fluffier texture when cooked and will absorb more fillings and flavours. A microwaved or baked potato in its skin contains more fibre than two slices of wholemeal bread, making it an excellent high fibre lunch ‘base’.

Cooking potatoes in the microwave is fast but the potatoes will not develop a crunchy skin as happens in the oven. Microwaving is ideal when cooking for one or two people.

The best homemade wedges and chips are made from floury textured potatoes – these potatoes will be labelled as baking or roasting*.

Varieties and how they cook