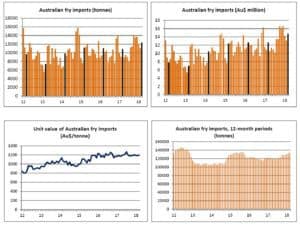 While the NZ dollar is tightly constrained against the Australian dollar, because of the importance of trade between the two countries, the Australian currency has this year weakened in value against the euro, making euro zone fries more expensive. It has also weakened against the US dollar, but in this case it has only returned values to the levels prevailing at this time last year.