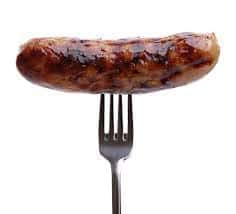 Posted by BlogAdmin on November 1st, 2014

Traditionally sausage making was  used as a food preservation technique, and with nearly every country worldwide having their own ethnic sausage its not surprisingly the different flavor combinations that we are seeing these days!  This year the sausage of the day was beef and blue cheese. Butcher Paddy Kennedy of Allenton Meat Centre was tight lipped about his technique used to evenly spread the cheese through the sausage meat, but was prepared to disclose that he uses local dairy Talbot Forest’s Pure Forest Blue.