See the “2008 International Year of the Potato” site for the history of the potato.

Potatoes have a huge role to play, not just in feeding New Zealanders, but also in feeding the world’s population and looking after the planet. Fortunately potatoes are a very efficient high-yielding plant, using less water than comparable crops, and are able to adapt to all sorts of growing conditions.

We are a nation of potato lovers and we efficiently produce enough potatoes both for ourselves and for export.

The world’s population is expected to grow on average by more than 100 million people a year. More than 95 percent of that increase will occur in the developing countries, where pressure on land and water is already intense. A key challenge facing the international community is to ensure food security for present and future generations, while protecting the natural resource-base on which we all depend. The potato will play an important role in efforts to meet those challenges.

The potato should be a major component in strategies aimed at providing nutritious food for the poor and hungry. It is ideally suited to places where land is limited and labour is abundant, conditions that characterise much of the developing world.

Potatoes provide a wealth of healthy nutrients as well as high-quality fuel to power the body. Count a potato as one serving towards the 5-a-day total. 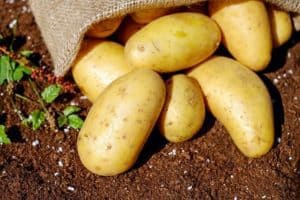 Virtually fat-free
Add toppings with low or no fat to keep them this way.

Carbohydrates for sustained energy
The big advantage of getting carbohydrates from potatoes rather than pasta, rice or bread, is that potatoes also contain many other vital nutrients.

Rich in minerals
Potatoes contain a balanced source of minerals for a healthy diet, particularly potassium.

Bursting with vitamin C
A medium sized potato can supply nearly half the recommended daily intake of vitamin C.

Valuable for B group vitamins
Potatoes contain vitamin B6, thiamin and niacin.

With the implementation of FSANZ Standard 1.2.7 in January 2013 there are new opportunities for promoting the nutrition and health benefits of foods.

Potatoes NZ Inc. commissioned Plant & Food Research to carry out a literature review to gather as much information as possible in order to provide the NZ potato industry with the current nutritional composition and health benefits of potatoes. This valuable research has resulted in the documents below:

All fresh potatoes are “naturally gluten-free“. Potatoes NZ Inc. recommends that growers and packers follow the guidelines below for using this nutrition claim:

All other promotional material (including websites):