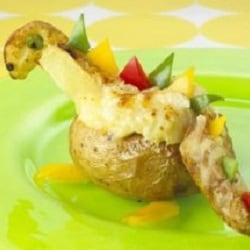 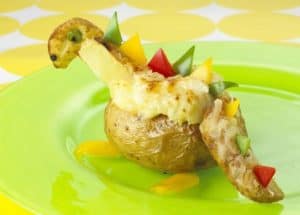 Children and adults will have fun making and eating these.

Bake potatoes until soft.
Either bake in preheated over for 55-60 minutes at 200°C, or microwave for 4-5 minutes per potato on high power.
Slice one-third off the top of the potatoes using a sharp knife.
Scoop out most of the potato flesh leaving a shell about ½ cm thick all around.
Mash potato flesh, first measure of cheese and milk together until smooth.
Pile back into the potato skin.
Pre-heat grill.
Cut the removed potato tops in half lengthwise to make two long wedges – one for the dinosaur’s neck and head and one for its tail.
Place filled potato shells together with the wedges on a baking tray.
Sprinkle potatoes with second measure of cheese and cook under preheated grill for a few minutes until golden.
Arrange potatoes on serving plates.
Push one wedge into each potato to be the dinosaur’s neck and attach a second wedge for the tail as illustrated.
Use the capsicums and olives to make the potatoes look like dinosaurs.

See also: Spuds on the Move and Boats for more ideas for children using baked potatoes.