A research project in New Zealand is determining if different field soils affect development of powdery scab on potatoes, and whether soil physical, chemical and/or biological characteristics influence this important potato disease. The project is developing new knowledge that may provide a basis for manipulating soil factors to reduce the harmful effects of the powdery scab pathogen.

Previous results from a long-term potato/onion trial carried out in the Pukekohe vegetable-growing region near Auckland, New Zealand, indicated that continuous potato cropping over ten growing seasons (years) did not result in increased incidence or severity of powdery scab on harvested

potatoes. This suggested that the trial site soil was “suppressive” to the powdery scab pathogen. Multiple potato cropping is usually associated with severe outbreaks of powdery scab, particularly in potato cultivars that are susceptible to the disease and to Spongospora root infection (Photo 2).

A cross-discipline team is working in the project, including plant pathologists, soil scientists and molecular biologists. In the study’s first phase, 12 field soils (including the soil from the 10-year Pukekohe trial site) have been evaluated for disease “conduciveness”, and their physical, chemical and biological characteristics are being determined. The soils have been chosen to represent different soil types, and differences in potential to support or suppress soilborne pathogens of potato.

An extensive greenhouse pot trial (Photo 3) has been completed, where the different soils were each placed in large (35 litre) pots which were then either inoculated with Spongospora or left uninoculated. The pots were each planted with a seed tuber of a powdery scab-susceptible potato cultivar. Root galling and powdery scab on harvested tubers, and plant productivity measurements (shoot growth and tuber yields), were assessed during the following 20 weeks to crop maturity.

The 12 field soils were also assessed in detail for their physical and chemical characteristics, using standard soil science methods. Samples were also tested for potential soilborne potato pathogens using the Predicta Pt service provided by the South Australian Research & Development Institute (SARDI). As well, DNA has been extracted from samples of the soils. This is being characterised using gene sequencing technologies to determine the microbial population profile of each soil.

The 12 soils differed for several physical and chemical factors. Soil texture was different (clay content ranged from 10 to 60%), and organic matter content also varied (soil carbon ranged from 2 to 14%). The soils differed in fertility and nutrient availability (e.g., Olsen tests for phosphate availability gave results from 30 to 260 mg P per kg of soil).

In the pot trial, root galls occurred only on inoculated plants, and mean numbers of root galls on these plants ranged from less than 1 up to 11. Mean marketable tuber yields varied from 0.64 kg per plant from one Spongospora-inoculated soil, to 1.73 kg per plant from a different, non-inoculated soil. Spongospora inoculation influenced the severity of powdery scab on tubers harvested from some of the soils, but had little or no effects for others. The soil containing the greatest amounts of pre-planting Spongospora DNA (Predicta Pt test) gave the most powdery scab on harvested tubers.

Data gathered from these different analyses will be integrated to determine if individual or combinations of soil physical, chemical or biological characteristics are associated with suppression of Spongospora diseases.

The next phase of the project will determine details of the microbial populations in the soils, and will then identify individual disease-affecting soil factors that could be manipulated to reduce disease.

These will then be tested for effects on powdery scab and associated root diseases.

The key outcome from this project will be new knowledge on which soil factors affect powdery scab in potato crops. This could form the basis for future research initiatives, to test new practical methods for management of root and tuber diseases caused by the powdery scab pathogen.

Manipulating soil nutrients or microbial populations could be used to enhance suppression of these key potato diseases. 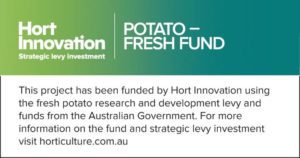 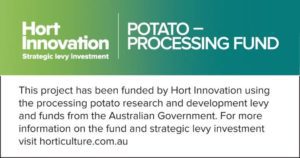